Why choose a palladium wedding band? If you want a wedding ring made from a precious metal with beautiful color and hard-wearing properties, but don't want to spend as much as you would on platinum, palladium is the choice for you. It is a relatively rare metal, now cherished for its lustrous silvery-white finish and because it has similar looks and properties as platinum. Palladium is resistant to corrosion and, unlike the less-expensive silver, will not tarnish in air. The more traditional or superstitious amongst you may be interested to know that the word 'palladium' means a guardian or a charm to protect or preserve, so palladium rings are thought to be good luck for a lasting lifetime of marital happiness. The metal was named from the tale of the goddess Athena, who was renamed Pallas after she slew a giant who tried to capture Mount Olympus, and when she had a sculpture built in her honor to protect the city from attack. 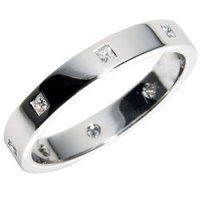 The History of Palladium: Palladium was discovered in the nineteenth century, and has very similar properties to platinum. It has been classified as one of the Platinum Group Metals, which also includes rhodium, iridium and ruthenium. From this group, only palladium and platinum are rare enough to be traded on the world commodities market. This is why you may see the prices quoted on Kodega's website change from week to week.

Palladium, like platinum, is used in many industries including car manufacturing, electronics and dentistry. Today, more than half of these metals are used for catalytic converters in cars. Interestingly, a disruption to the supply of palladium in the late 20th century lead to car manufacturers panic buying the metal to stockpile, which drove up the price enormously. The price subsequently dropped, meaning the car companies lost a vast amount of money.