Platinum Wedding Rings: Platinum is a favorite for use in jewelry because it resists wear and corrosion, and because it is hypo-allergenic. When scratched, the metal is displaced rather than lost, so the volume of metal remains the same. Platinum used in jewelry is an alloy and is mixed with other metals to refine its characteristics. Our platinum wedding bands have a purity of 95%, the remaining 5% comprises of a second metal which can vary depending on which supplier we use. 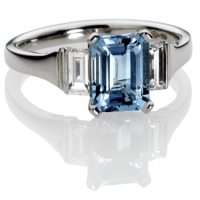 "Platinum's physical properties mean
that is ideal for use in jewelry"

Origin of the Name: 'Platinum' comes from the Spanish word platina, which means "little silver" - the first platinum discovered was thought to be an impure nuisance when panning for gold in the sixteenth century.

The History of Platinum: Most of the references to platinum have been since the sixteenth century, but it has been found in artifacts from as far back as 700BC. 18th century scientists identified platinum as potentially useful, but found it difficult to use due to its high melting point and hardness. This changed in the 19th century, when technological advancements meant scientists were able to alloy platinum with other metals to make it malleable. Historically, major global sources of platinum have included Russia and Canada, but today most platinum comes from riverbeds in South Africa. Demand from Japan in the 1960s brought platinum to the forefront of the jewelry market, and since then it has been cherished for its purity, color and prestige. Since the 1980s, platinum has also been identified as potentially useful in medicine, specifically in treating cancer and in pacemakers.

Platinum Today: Platinum is a extremely rare element - it is said that if all the worlds platinum reserves were poured into an Olympic sized swimming pool, there would only be enough to cover your ankles. For comparison, all the world's gold reserves would fill three pools of equivalent size. Platinum is a really useful metal and is widely used in industry - most famously for catalytic converters in cars. This combination of high demand and great rarity has the effect of making platinum a relatively expensive metal and is the most expensive metal we sell.