Titanium jewelry: Titanium wedding bands are growing in popularity because they don't tarnish at room temperature and are very strong. Titanium is abundant in nature (which helps keep price down), but it is difficult to shape - the techniques needed to refine it enough to shape for jewelry have only recently been developed. This hardness means that Kodega cannot resize rings made from titanium, so please be sure of your size before ordering. Titanium is non-toxic, which means its excellent for those with allergies or sensitive skin - in fact, titanium is often used for surgical implants due to the fact the human body does not reject its presence. It is resilient against sea water and chlorine so is ideal for those who will want to wear their ring when swimming. 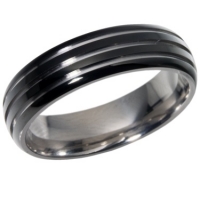 "Titanium is non-toxic, which means
its excellent for those with allergies"

History of titanium: A British geologist (and vicar!) called William Gregor discovered a new metal in England in 1791, and called it 'manaccanite'. German chemist Martin Heinrich Klaproth also found the element around the same time, and named it titanium after the Titans in Greek mythology. Gregor was credited with discovering it first, but Klaproth's name stuck.

Titanium is found in almost all living things as well as in water, soil and igneous rock. It has been found in meteorites and moon rock; and has been detected in the sun. It is used in many industries, including cars, mobile phones, fire arms, medicine, aerospace and of course jewelry. Its main qualities are its strength - it is as strong as some steel but much lighter - and is resistant to corrosion.